Stars form when the right amount of dust and gas coalesce due to gravitational pull. Within the star nuclear reactions continue to release energy to keep the star hot. Just before the star bursts into existence all these forces are working together at their optimum strength.

It’s a sultry early Autumn day and the leaves on the trees are beginning to feel a little restless. The greens are transmuting to the first hints of yellow. The sun is high in the sky and the wind is thinking about migrating from north to east. I’m in my car parked in a road near the eastern entrance to Worthing where suburban folk mow lawns and shape hedges to fit whatever sits behind their frontal consciousness. Up the road is an ordinary secondary school that doesn’t quite realise yet that it will become famous soon, mentioned in Wikipedia, visited by pilgrims, worn as a badge by generations of students to come. At the other end of the road is a pub, deadly quiet at 3 o’clock in the afternoon, unaware that it will become the third or fourth point on the tours that will sprout up in this very ordinary part of West Sussex, England.

I’m parked outside Mike Kerr’s house, or more accurately, his parent’s house, waiting for Mike to arrive, ready to drive him across Sussex to radio studios where we will conduct the only radio interview in the week when his band’s album has gone to Number One in the official UK charts, with 66,000 sales in six days. Noel Gallagher’s ‘High Flying Birds’ album four years ago was the last rock album to sell as many. Later in the interview we would joke about Mike and Noel leaning against the bar and comparing album sales, we would joke about Mike getting Dave Grohl wrapped in a box for Christmas.

Half a decade ago I’m in the Thomas a Becket pub in Worthing watching a band comprising four  kids who were at school with my son and who I had known since they were eleven years old deliver an electrifying venom-filled punk set with their leader and songwriter George McCanna delivering invective disguised as rock lyrics about the pointlessness of suburban life. Flavour Country with George, Joe Dennis, Toby Lancaster and a young, bespectacled geeky guy called Mike Kerr on keys and bass were a ferocious blast of teenage aggression, bemusing the pocket of regulars leaning at the bar. 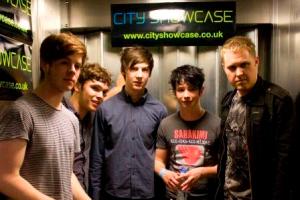 A little later I’m in the Cricketers in Broadwater, Worthing. My marriage has fallen apart and my only solace is the music. I’m nursing a pint of Harveys, the only beer you should drink in Sussex, when the young keyboardist in the band that had morphed from Flavour Country into Hunting the Minotaur gets up and sings with a guitar. I didn’t know he sang, and it was good. The dust and the gas were forming, the atoms splitting.

The taxi pulls up and out rolls Mike and his old friend from school, Nat Clark. They had been in a pub and Mike needs to go in the house and have a leak. Nat sits in the car. “Well, I say”, “what do you make of all this?” “Mad” he replies. Mike studied catering at Northbrook College and has been working when he’s been working as a trainee chef amongst other things. This week the job description changed to actual, real, bona fide rock star. 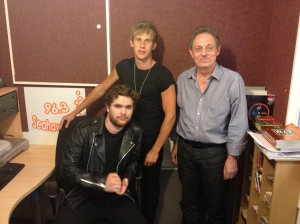 Yes, he and Royal Blood duettist, drummer and mate, Ben Thatcher have appeared at Glastonbury, Reading, Leeds, and Finsbury Park with the Arctic Monkeys. They have appeared on Later with Jools Holland when Neil Finn put the thumbs up on camera at the end of their explosive performance of ‘Little Monster’. Matt Helders of the Arctic Monkeys wore a T-shirt hurriedly created for him when they headlined at Glastonbury. At that point Royal Blood hardly existed.  The NME and Kerrang and Q started calling them the future of Rock ‘n Roll. But until this week they did not have a Number One album.

I had Mike’s phone number on my mobile. My son Callum, a mate of Mike’s had forwarded it. I texted Mike and asked for an interview. The old respect between young musician and someone who has run radio stations and labels kicked in. Against the advice of his management, label and press office, he agreed to meet up.

Earlier that day at 7am I had driven over to Seaford to load the computer play out system at Seahaven FM with the Royal Blood album in its majestic entirety, some historic and very rare Flavour Country/Hunting the Minotaur tracks and a selection of music that Mike had referenced in interviews and some other stuff I just knew he liked. ‘I know him’ I thought.

We are in the car driving though the South Downs on the way to Seaford. Mike’s phone rings. It’s George McCanna, his  old compadre in Flavour Country/Hunting the Minotaur. He’s heard that Mike is back from touring for a couple of days before flying to Paris for the next leg of the tour. They arrange to meet later.

Mike tells me that he learned to sing in Joe Dennis’s living room, practising and remembering some of the tricks that George used to deploy. I can hear George in one or two of the higher register yowling vocal breaks. The neutrons start to split and re-connect. The forces are forming like a large dark cloud on the horizon. I realise that this will be the last car journey like this. Ordinary and relaxed, three people laughing and joking on the way to another Sussex town.

Mike’s mobile is very private. There are no press interruptions even though everyone wants to talk to him. He has grown charisma, the star quality sets like a interplannetary aura around him. The old spectacles have gone, the hair is wild but fashionable, the leather rocker jacket stylised and perfect for the music, the speech more considered, the gaps between questions and answers long enough to create a sense of importance. With a jolt I realise that he does now look like a young Marlon Brando.

We arrive at the studios. Seahaven FM is a small independently run and financed radio station. A community station where no-one is paid, even the fulltime Director, Nick Mallinson, who does what he does for the love of it. These stations occupy the space that the old pirate stations used to before they went dance obsessed. Enthusiasts gather around the microphone to deliver their eccentric, passionate, obsessive love of music in all its colours and genres for the pleasure of other obsessives. 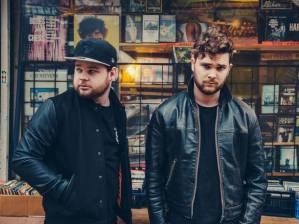 There are 250 and rising of these stations in the UK. They attract over 1 million listeners a week. Who? People interested in their community, the travel and the traffic, the micro climates of weather, gossip and what’s on. Seahaven FM on 96.3 in Seaford, Peacehaven and Newhaven and on www.seaheavenfm.com is one of the better ones. David Scott, erstwhile of Southern FM and other commercial stations, now retired, occupies the Breakfast slot. The local MP Norman Baker has a show called ‘Anything Goes’, and anything does, musically. There are world music shows, rock n roll shows, jazz shows and I play whatever I like on my Thursday 7-9pm slot because I’ve been listening and working with music for the best part of 40 years and I’ve paid my dues.

I re-arrange the songs on the playlist to suit Mike Kerr’s mood and taste. Unaccountably, I feel nervous. The boy I knew has grown into a man, a star has formed. He has ‘people’ who look after him, but today he has climbed under the fence and escaped. He is off line, off circuit. He can say what he likes and so can I.

The next two hours fly by. I cover all the obvious questions that you can read in all the press interviews, but we also go a little deeper, the prodigiously talented George McCanna is mentioned and honoured. Mike’s Mum, Angie and Dad, Bob, who I have known for years are thanked. His school friends Joe, Toby, Alex and my own son Callum are referenced with love and respect. All musical talents in their own right. We play adrenalin-pumped rock and roll, we nod back to Led Zeppelin, and nod forward to Drenge who have left the ‘F’ word at the end of their track ‘Blood Sport’ and which, having heard it go out live, I have to go back and edit out on the recording. The Arctic Monkeys, Foals, Muse, Queens of the Stone Age, The Raconteurs, Them Crooked Vultures also feature. Musical signposts rather than antecedents, combined with the Royal Blood album it’s a rock ‘n roll show that Peel, Walker, Lamacq and the others would have all revelled in.

At the end, we all feel good about what has happened. In this week of all weeks, it’s good to mark the passage of time, to pay respect to the people who have helped along the way. This may be the last time Mike Kerr gets to be the local boy from Worthing chatting about music with his mates.

I drive him and Nat back to Worthing. It’s been a blast. We say goodbye outside a pub. He walks in and Ye Olde House at Home in Broadwater, Worthing joins the ranks of the immortals.

The particles collide. The light explodes. Mike walks through a doorway and the star forms.

From now on we will all have to watch it from a distance.

The interview and track by track discussion of the Royal Blood album along with all the tracks can be heard on Mixcloud/roystannard:

How other people spend their time

Powerchange: Are you in control of your thinking? Survey